Discover the Old City's ancient landmarks around the hotel 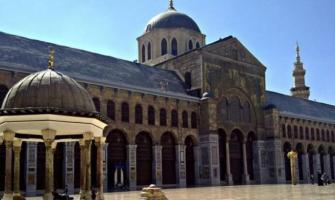 The Great Ummayyad Mosque remains one of the great symbols of the glorious period of Muslim civilization and its pride. It is a master piece of architectural ingenuity having a decisive influence on the maturity of mosque architecture all over the Muslim World. The mosque was the birth place of a number of key elements in Muslim architecture such as the horseshoe arch, the square minaret and the Maqsurah. Historically and culturally it is still one of the oldest and holiest shrines of Islam. ·*      The spot where the mosque now stands was originally a temple dedicated to the idol Hadad in the Aramaean era about 3000 years ago. When the Romans ruled Damascus a temple was built for the worship of Jupiter. It then became a Christian church dedicated to John the Baptist in the Byzantine era towards the end of the fourth century. *    Following the Battle of Yarmouk in 636 CE, Damascus was conquered by the Muslims under the leadership of Khalid-bin-Waleed (may Allah be pleased with him). The Muslims shared the church building with the Christians for worship. The Muslims prayed in the eastern section of the structure and the Christians in the western side. 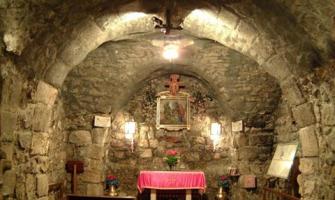 The Chapel of Saint Ananias

The Chapel of Saint Ananias is the ancient house of Saint Ananias, in the old Christian quarter of Damascus. It is believed to be the house where Ananias baptized Saul (who became Paul the Apostle). Located near Bab Sharqi (Eastern Gate), five meters below ground, the church was supposedly the cellar of the House of Ananias, but more likely it was built at the level of the Roman street. The church, which has been restored many times, is the only church from the first century to survive in the city. A simple structure consisting of two small rooms with bare stone walls, it houses an altar, some icons and a few pews. The icons tell the story of Paul’s conversion. It represents the simplicity of the early Christians and services are still held to this day. 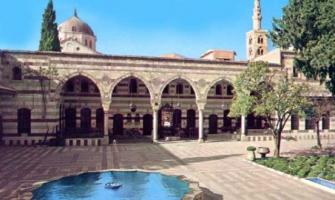 The Azem Palace was built in 1752 by the Ottoman governor of Damascus As'ad al-Azem. As’ad Pasha came from a Syrian family who had governed Damascus for two generations. Displaying the power and prestige of the Azem family, As’ad Pasha built the palace using family funds. Part of the palace was purchased by the French government in 1922, only to be largely destroyed after the French attack on the Old City in 1925. As’ad Pasha himself had commissioned the reuse of older columns, masonry and even timber from local buildings, incorporating different aspects of Damascus’ past into his palace. The palace has two main wings: the haremlik and the selamlik. The family wing, or haremlik, was a private space which contained the sleeping quarters, the kitchen, the hamam, the servant’s quarters as well as an impressive courtyard with a variety of plants. The selamlik was where guests were received, with its formal halls, reception area and exclusive courtyard. 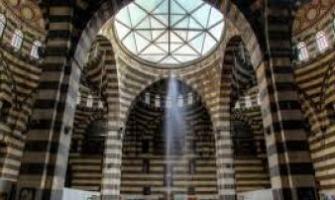 Khan Asad Pasha is an important monument in the walled city of Damascus, within the Bzouriyyeh Souk. It was built by the governor of Syria, Asad al Azem, in 1752, and has changed hands more than once since. It was being used as a storage space in the heart of a busy commercial area by a large number of shop owners. This use was found incompatible with and detrimental to its many qualities and the Syrian Department of Museums and Antiquities decided to intervene. The two storey structure, which is considered to be unique, is square in plan, with a large, central court surmounted by nine domes. It contains a total of 80 rooms distributed on two levels around the courtyard. A monumental portal allows access to and from the souk. The intervention included the reconstruction of certain structural members, such as the four central pillars of the courtyard, and the domes. The construction is double bearing walls of stone and four central pillars, flat roof combined with brick domes and stone vaults, bricks and plaster mixed with gravel for infill, and alternative courses of white limestone and black basalt on the external façades. 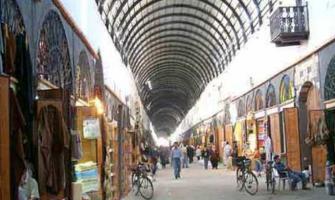 Souk al Hamidiya is the most famous historical bazaar in the heart of Damascus. It  extends north east inside the old city, from the tips of the western wall of the Damascus citadel, to reach al Miskiye ; that is, from al Nasr street to Bab al Breed near the columns of the temple of Jupiter. The souk was built in two stages: The first stage was finished during the rule of sultan Abdul Hamid I, when Mohammad Pasha al Azem was the governor of Damascus. The souk started from al Darwishia and ended in al Asrouniyeh. This stage was finished in 1780, after which the souk was named the “new bazaar“. The second stage: In this stage the souk was extended from souk al Asrouniyeh to Bab al Breed during the rule of Sultan Abdul Hamid II, 1883. To enlarge the souk, a narrow gate known as Bab al Nasr was removed to allow enlarging the main present entrance which leads to al Nasr street. Renovation and Roofing of the Souk. In 1884 the souk was renovated and completely roofed with wooden boards. The wooden roof was later replaced by new corrugated tin boards to avoid fires. 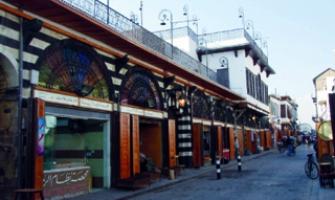 Midhat Pasha Souq is a historical souq which forms the western half of the Street Called Straight inside the old walled city of Damascus, Syria. It was named after the then Ottoman governor of Syria Midhat Pasha who renovated it and ordered its coverage with a lead-shade. Many smaller souqs branch out of Midhat Pasha including al-Buzuriyah Souq and al-Harir Souq.   Many important sites are located along the street including Maktab Anbar.

Made with love by: VOILA